The early Greek immigrants who traveled to America faced hardship and frequent changes in employment. These intrepid Hellenes were not afraid to move at a moment's notice for a better job, to observe a fellow villager's funeral or to attend a relative's wedding no matter the effort required or distances involved.
The Colorado Fuel and Iron Company, along with the presence of various major railroad lines and mines, brought an estimated 3000 to 3500 Greek men to the city of Pueblo to work in the largest smelter complex west of the Mississippi or seasonally on the railroad section gangs and mines. Given the larger complex of industries in the state, an estimated 15,000 Greeks were said to be in Colorado between 1900 and 1920. Pueblo soon became the center for one of the most dynamic and viable Greek colonies in the American West. 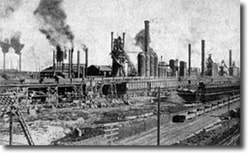 In 1903, under the direction of Dr. Christos Argyriou, a Greek committee formed and in 1905 the Greek Orthodox Community Association of Pueblo Colorado was registered with the state. The three points of this new corporation was to build a church, secure and maintain cemetery facilities and to help Greeks establish themselves in the region. On February 10, 1907, such was the drive of these early Greek immigrants that the St. John the Baptist church structure was fully completed (largely through volunteer labor) at 1010 Spruce Street. The parish community, with Rev. Father Kalistos Papageorgopoulos as its first priest, soon served a geographic area that spanned from just south of Denver south to Raton, New Mexico, from Garden City, Kansas west to eastern Utah. The multi-community character of the first days of the parish has continued to the present. 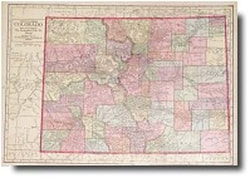 Since literally thousands of Greek laborers were drawn to Colorado and the west during the early 1900s, Greek individuals and families from a host of communities regularly attended (and still attend) the St. John Parish. A partial list would have to include (but is not limited to): Alamosa, Aspen, Canon City, Colorado Springs, Garden City KS, Grand Junction, La Junta, Lamar, Leadville, Questa NM, Raton, NM, Salida, Trinidad, Walsenburg and a host of other small hamlets and towns in eastern Utah and the southern Colorado region. As a consequence, those with memories of the Pueblo Greek community have never all been exclusively from that city. 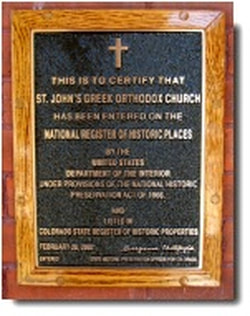 St. John the Baptist parish has never moved from its original building, it has the distinction of being the oldest Greek community still celebrating liturgy in the same location in the entire American West.
Complimenting this fact is that on February 28, 2002, the St. John the Baptist Church was placed on the National Register of Historic Places. 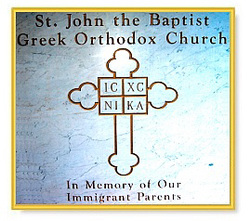 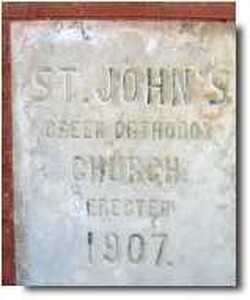 Renovation Projects
A very generous donation from Ted Argys from Salida, CO, in memory of his wife Helen, jump-started the Renovation Fund and projects at St. John. From this donation, The Royal Altar, the Proskomidi and the Honorteron were covered in white marble. Other donations served to finish the present engraving and the future engraving to be done on the Centennial Plaques.
The Aspe (the curved east wall in the Holy Altar) will soon be lined in white marble as well. The names of deceased loved ones has been inscribed upon a marble Centennial plaque. Another marble plaque will be used as a Living Tablet. The positioning of these tablets on the west wall of the church will allow parishioners to see the names.