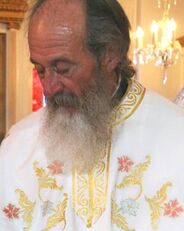 At the age when young people take the paths that set their future and destiny, Fr. Thomas labored over the questions, “What is Truth?”, “Why do I exist?” and “Where is to be found true joy?”. For he had observed that wealth, popularity and the other things commonly sought after did not produce true, lasting happiness.

He considered that on the answers to these questions hinged the course of life to be taken – that all else was vain and empty. To find the answers, he went on a journey. Following the paths that the World offered left him at the end of two years in great darkness and seemingly further from the truth than when he began.

Fr. Thomas felt like a piece of flotsam thrown up on the shore by the turbulent waters of life. In His great mercy, God Most High, the Father of our Lord Jesus Christ, opened the eyes of Thomas' heart to see that He Himself was the source of all Truth, Life, Beauty, Joy and everything good and desirable. Jesus Christ came to him revealing Himself as the healing of sin, the cause of Thomas' misery. In Jesus, he saw Beauty, Truth and Love inexpressible; saw that Jesus was risen from the dead; and that He Himself was the answer to all he sought. Thomas gave his life to Jesus, desiring to know, love and serve Him all his life.

Fr. Thomas became involved with Protestant Christianity, in time being ordained a minister. He wed Kristin, served 20 years as a pastor, and together he and Kristin raised 3 children. At the time of the fall of Soviet communism, Thomas, Kristin and family went to Ukraine as missionaries. There they encountered the Orthodox Church, so similar to, and yet so vastly different from the Christianity they had known. The longing their hearts held for years for the fullness of the Church as they had seen it in Scripture began to be answered in Orthodoxy. Here was the Well of Salvation that was not a false or dry well, nor clouds without rain. They all gladly were received into the Orthodox Church, putting behind them years of wandering in a dry and thirsty land.

The Lord is the Spirit, and He calls us with great love to Himself, to experience true and everlasting life, to be free from the emptiness and oppression of this mere earthly existence. He heals the brokenhearted, and satisfies the thirsty soul.

The Bride is the Church, Christ's body. The Bride, together with the Lord Jesus, calls us with one voice, “Come”. Thomas and family finally heard the voice of the Lord and the Church, the One Voice, and came like grateful refugees to a safe haven. Father Thomas' hope and prayer is that all who hunger and thirst for true life will come to Jesus and His Church, which is one and inseparable. May all who read this heed the voice of the Spirit and the Church-Bride which calls out, “Come!"